March 13th: the day we honor all of the MWD, or military working dogs, in the United States Armed Forces. It’s National K9 Veterans Day and the team here at Off-leash K9 is especially excited to celebrate this holiday as a proud, veteran-owned company.

Seventy-nine years ago, on March 13, 1942, the US Army launched the “K9” Corp, marking the day as the first time dogs became an official part of the US Armed Forces.[i]

One of America’s first and most beloved war dogs served in the first Great War. Sgt. Stubby, a stray pit bull terrier mix, wandered into a training camp in Connecticut where he won over the hearts of the soldiers. The little dog stowed away and ended up on the front lines. His ability to detect incoming rounds, among other heroic acts, won him over a dozen awards and a purple heart.[iv] For a heartwarming look into Stubby’s life, you can check out Paramount’s 2018 cartoon film, Sgt. Stubby: An American Hero. 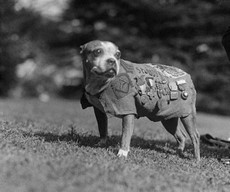 In WWII, dogs became officially part of the troops. The K9 Corps was comprised of about ten thousand dogs, mostly donated by American families. Until this time, dogs were almost exclusively used on sled teams in the arctic. The new program was called Dogs for Defense Inc. (DFD) and was iterated on for some time, identifying both ideal breeds for specific services (patrols and expeditions) and requirements dog trainers needed so the trainings would be successful. An extensive account of WWII programs can be found here.

After their official inclusion into the military, dogs were able to undergo specialty training to best prepare them for the work they encountered overseas. This training only improved during each wartime encounter and at one point during the Vietnam War, the bounties on dogs were up to $20,000 because they were so effective at their job.[v] One dog handler, Richard Cunningham, said in a New York Times piece, “I’ve heard it said that without our military dogs, there would be 10,000 additional names on the Vietnam Veterans Memorial wall. I, for one, think that’s an understatement.”[vi]

K9 Veterans and their Training

Training for these types of war heroes is intense and highly specialized. The roles military dogs have during their service are full of acronyms, but in short, include sentry and patrol work, search and rescue, and detection.[viii]

Training for all roles focuses primarily on honing in the dog’s sense of smell for their role. German and Dutch Shepherds have become the most frequently trained dog for military service, citing their dependability and trainability as the reason. Labs and Retrievers are frequently sought out for detection work.[ix]

All military dogs are trained at the Lackland Airforce Base in Texas. Training here starts with a 120-day program that uses “positive reward” and focuses on basic and advanced specific skills. After this first part of training, dogs work with their assigned handler, learning how to work as a team. All dogs that complete this program graduate with a “dual [certification] in explosive detection and patrol”[x].

What happens to our canine companions after they have completed their military service? Thanks to the law affectionately known as “Robby’s Law,” signed into effect by President Clinton in 2000, all MWDs “suitable for adoption [must] be available for placement after their service”[xi]. The law has only been refined further since then. In 2015, MWDs were determined to no longer be classified as “equipment” in the military[xii], and in 2019 language was added that gives dog handlers first priority to adopt them after their service[xiii]. At this time, about 90% of dogs are adopted by their handler. Those that aren’t are given priority adoption to the Police force.[xiv]

So today, give an extra treat to your furry friend in honor of their fellow patriots. And for a different kind of training tailored to your dog’s unique personality, check out Off-leash K9’s full menu here.