Almost two years ago, we adopted an adorable puppy whom we named Babou. Just like our previous four dogs, we took her to a puppy obedience group training that used positive reinforcement techniques. Then another training when she was around one year old. Then a third group class at one and a half.

Babou was great at obedience when there were no distractions around but would completely ignore us and pull whenever she saw a bunny, a grasshopper, a big bird, or another dog. One day as we were hiking with Babou on-leash, she suddenly saw a little squirrel scurrying across the steepest downward section of the trail and she pulled hard. I fell and injured my leg. That was when I thought: “This isn’t working. This dog has more intense prey instincts than any dog I’ve had before. We need help.”

I sought out Off-Leash K9 Training Colorado and signed up for their private Basic Obedience class. Here’s what happened during our 4-week training program.

We met with our trainer Stevie in the grassy area outside the Denver training facility. Stevie demonstrated the e-collar equipment in detail: how to turn it on/off, how to hold it, how to use it. Like all clients, I got to experience what a “tap” feels like. I could hardly feel the gentle sensation. Stevie then showed me how to spot when Babou is feeling the sensation of the e-collar, with a brief eye wink or light twitch of shoulder. It does not hurt my dog. Instead, it acts as a clear communication tool between us, even when my dog is distracted.

The first command we worked on was “sit”. Stevie explained that the expectation is for the dog to sit until the handler tells the dog not to. No more “sit” followed by a “stay” to keep sitting. Just “sit”.

Babou already knew “sit” so Stevie added distractions by walking around and alongside her all while talking to her. It was when Stevie used a high-pitched playful voice coupled with playful body movements that Babou broke her sit to come investigate with a playful waggy tail.

While Stevie showed us how to practice “come”, Babou showed her distracted side when she spotted a squirrel. There was also a German Shepherd puppy training further down the lawn. These are the kind of challenges that we encounter in everyday life. With Stevie’s guidance, I learned how to shift Babou’s focus from the distraction back to me. This is a command we need to practice – a lot.

Stevie encouraged us to practice 30 minutes a day at home in-between classes. It could be broken up into shorter 5-10 minute segments. We practiced “sit” by the front door while I watered the plants outside. “Come” in the backyard, then on our front driveway. I found that I was learning just as much as Babou and it was up to me to help us both progress with a daily practice regimen.

A week later, we were back for our second lesson with Stevie. First command today was “off”, a command to use when the dog is doing an unwanted behavior such as jumping or counter-surfing. The trick is to catch the dog in the act. The opportunity came already the next day at home, Babou’s front legs were on the kitchen island and all it took was one correction and she didn’t jump up again.

Next, we worked on “place” which was a new command for us. Here, the handler should be able to point to a location and the dog go there and sit on that spot.  I recognized that “place” would be a very practical command for me to use at home. When a guest comes, instead of barking and running up to the newcomer, I can redirect Babou to go to her “place”.

Stevie brought out a cot, an elevated dog bed that stands on short legs. The dog was to start in “sit” close to the cot and the handler to use hand movement as a visual cue while saying “place” to direct the dog to move onto the cot and ask for sit.

Initially, Babou was her stubborn self and decided to just sniff the grass or stare the other way. She also attempted walking around the cot to sit next to me, but Stevie did not give up and Babou finally understood what was expected of her. Babou enjoys climbing and jumping so once she got the hang of it, she was more than willing to “place” on top of a table or bench when asked. 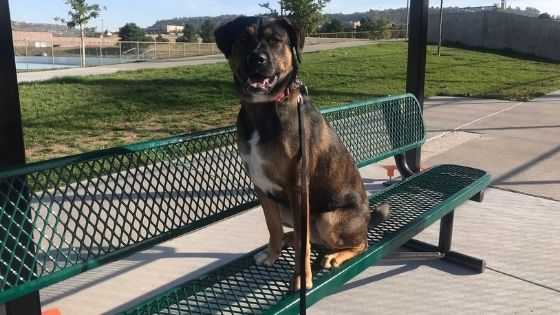 Finally, the lesson I was looking forward to the most: heel. The entire hour was focused on teaching Babou how to heel on a loose leash. It was exhausting mental work for stubborn Babou and she slept a lot that day.

Stevie started off by teaching Babou what the new expectations were: the dog’s head or shoulder could not be in front of the handler’s left leg. Babou was no longer allowed to pull, lag behind, get distracted by sniffing, make sudden stops, or zone in on other dogs or rabbits. Turning right or left, she was supposed to keep up or slow down to stay in position throughout the turn.

I observed at first, then walked alongside them both. When it was my time to take the leash and walk, Babou already had the hang of it but would test her boundaries or forget the new expectations. Stevie added distractions by making loud sounds, dragging her feet, or talking excitedly to distract Babou. We even saw other dogs further away that Babou learned to ignore.

Stevie suggested we practice 10 minutes of “heel” and 10 minutes of sniffing during our daily walks. Don’t expect the dog to be in “heel” the entire walk, let them be a dog, and explore too. That same afternoon, I practiced what Stevie had shown me. What a difference it made on our walk! I gave Babou permission to sniff during one section of the walk, then asked for a “heel” and practiced staying in the proper position. I was able to walk her back with her leash held loosely in one hand, my arm stayed relaxed by my side.

Our last class. The weeks had passed so quickly, I will miss the training and Stevie’s clear guidance. The final session focused on “down”, a submissive command that comes in handy if I want Babou to simply stay in one place for a longer period.

Babou knew this command from her earlier training so we focused on “down” on a cot, then added in working at a distance. By the end of the class, I was able to walk 6 feet away from my dog, give the command and Babou laid down. I could even walk around without holding the leash and she would stay until I released her from the down command.

Life After the Basic Program 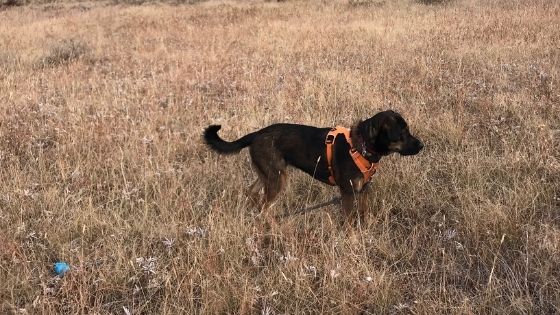 Now, just a little over a month after our first session, Babou is now much better at listening and I feel more confident than ever that we are finally on the right track. During our last class, Stevie said Babou was close to start working off-leash. I could not believe it. Sure enough, one day while walking across a large open meadow in the mountains, I dropped Babou’s leash on the ground on purpose and she stayed close by me “off-leash”!

Our journey to an off-leash life continues – now it is up to me to keep practicing. I have a way of clearly communicating my expectations to Babou – and she listens. Well, mostly. We are still working on bunny-distractions but I know we will overcome those with consistent, daily, practice.

I would highly recommend anyone that has a stubborn dog to explore what Off-Leash has to offer. Book a free consultation and meet with a trainer in person. What do you have to lose?